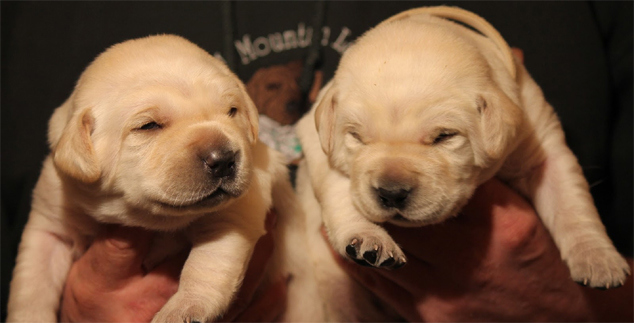 Lab puppies open their eyes when they are 2 to 4 weeks old. It may be different for puppies in the same litter. Just as human babies develop at different rates, so do Lab pups.

Before the eyes open, Lab puppies cannot see anything. It is almost as though there were no eyes. When the eyes do open for the first time, the pup will see only fuzzy shapes. Gradually, the fuzziness will clear, and each pup will be able to see its litter mates and its parents.

Even though the eyes are not opened at first, Lab pups can feel and taste very well. They know their mother. Her milk and the touch of her tongue fill their perceived needs. They don’t care about humans at this age.

As with the eyes, Lab puppies’ ears begin to hear things sometime between the second and fourth week of life. In these early weeks, the development of other abilities also occurs.

When Lab pups open their eyes, it is time to socialize them. Give opportunity for them to be handled by a number of people. It is good if the people can be male and female, young and old. Show them how to hold the Lab pup safely, and pass it around. Every time the Lab pup is held, the holder should play with its paw pads, its tail, and its ears. Pet the Lab puppies on every part of their bodies so they are not afraid of people.

Make occasions for the new Lab pup to meet and interact with other dogs. If you introduce it to cats, do so cautiously. Cats can seriously injure a Lab pup’s eyes with one swipe of a paw.

A Lab pup is influenced by many things during the first few months of life. As changes occur in its body, the things that influence it also change. The following information is courtesy of the USSPCA.

Since most people buy a Lab pup when it is about 8 weeks old, it will already have learned much from its mother and littermates about being a dog. It will have learned from the people around it whether humans should be trusted or feared.