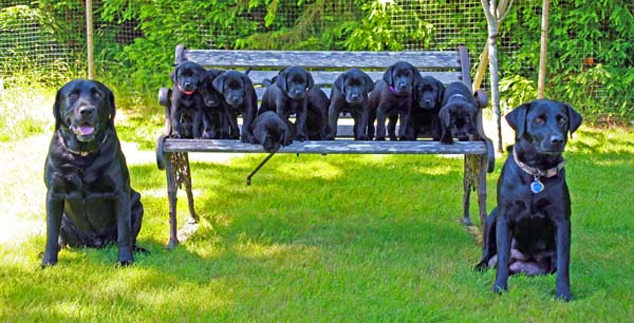 Of the three colors of Labrador Retriever, black, chocolate, and yellow, it seems the black has gained most popularity. Is it because the color is more beautiful? Are black Labrador Retrievers more intelligent or affectionate?

Black Labrador Retriever color questions are readily resolved if you think back to what you learned about genetics. Genetics is the scientific study of heredity – dominant and recessive genes. We use it, among other things, to study the colors that are likely to be passed on to offspring.

The “B” gene and “E” gene both are dominant. No matter what else a Lab inherits, if it inherits a “B” and “E” gene, the coat will be black.

Black Labrador Retriever coloring is pure black if the puppy receives dominant black “B” genes from both parents and dominant expression “E” genes from both parents: BBEE. The puppy will be black, and carry recessive genes as long as it receives from its parents at least one “B” gene for black color, and one “E” gene to let the color show. For example: BbEe will be black as will BbEE or BBEe.

The genetic heredity of a Labrador Retriever puppy may include either “B” or “b” genes and the puppy still be yellow rather than black or chocolate. The secret is in the “e” genes. Remember, the “e” genes keep color from showing. They are recessive, however, so the puppy must have two “e” genes to keep color from showing. As long as it carries no “E” gene to make color show, the puppy will have a yellow or nearly white coat â€“ the absence of color. The three possible combinations for yellow Labs are: BBee, Bbee, and bbee.

What Color Will Your Labrador Retriever Puppies Be?